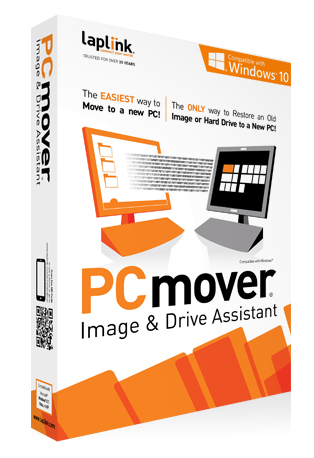 PCmover makes it easy to set up a new PC with a wizard that guides you step-by-step through the screens - perfect for all ages and skill levels!

The applications selected during restore are installed automatically - no need to search for old CDs or serial numbers.

Transfer all selected applications, files and settings from an image or an old hard drive to a new PC without overwriting anything (even the target operating system remains intact)

The only way to selectively restore the contents of an image or an old hard disk to a new PC!

PCmover Image & Drive Assistant™ is a groundbreaking software that complements every imaging software currently available on the market. With our software you can recover data from an image of an old Windows® PC (or directly from an old hard drive) to a newer PC.

Without PCmover Image & Drive Assistant, all the images from a Windows XP, Vista or Windows 7 computer will not help you set up a new computer if, for example, the old PC crashes. Standard imaging products are only capable of restoring the entire image, including the operating system stored on the image, so restoring an image created on XP, Vista or Windows 7 on a Windows 8 computer would overwrite everything, even Windows 8 itself.

PCmover Image & Drive Assistant solves this problem. Designed for use with all major imaging software products, it allows you to restore data from any image on a computer running the same or a higher operating system and migrate without overwriting any data, including the target computer's existing operating system. This process is called Operating System Independent Restore.

The user-friendly on-screen wizard allows the user complete selectivity and control over the programs, folders or file types to be restored. With a simple undo feature and money-back guarantee, PCmover is a smart choice when it comes to your image recovery needs.

Please refer to the user manual for more information.

When to use Image & Drive Assistant

Your computer crashes; however, its hard drive remains intact. Use PCmover Image & Drive Assistant to automatically restore all or selected programs, files, and settings from this hard drive to a new PC, even if the target computer has a different operating system than the old PC where the hard drive came from (for example, the old PC had XP and the new computer has Windows 8 installed). Nothing is overwritten on the new PC and all the applications you select are installed and made ready for use on the target computer - there is no need to reinstall migrated programs or find old serial numbers. The only thing to keep in mind for this scenario is that the old hard drive on the new computer must first be recognized as a separate drive - and PCmover Image & Drive Assistant does the rest.

You have a PC with an installed older version of Windows and this old PC gets lost or is irreparably damaged (e.g. does not boot anymore or is irreparable). Before this event, however, you had created a backup copy (image) of the computer. You will probably need to restore this old image to a newer computer, such as a computer with Windows 10 installed. If you use imaging software to restore the image now, everything on your target computer will be overwritten, including its operating system (in this case: Windows 10)! This is where PCmover Image & Drive Assistant comes in: Instead, simply mount the image as a virtual drive on the new computer and then run PCmover Image & Drive Assistant to restore the contents of your old image to the target computer. Nothing will be overwritten, and you will find all data in the usual system locations. Only PCmover Image & Drive Assistant provides the functionality of such an operating system independent recovery.

PCmover should only be used for its intended purpose and in accordance with the user manual. If you attempt to use this product other than as intended, your computer may become unstable or unusable.

How and when do I get my purchased product?
Digital products, product keys and access to the download center will be made available to you by email immediately after your purchase - unless a data medium has been ordered.
What payment options are available to me?
PayPal, Amazon Pay, Instant bank transfer, Credit card, Apple Pay, Prepayment, Purchase on invoice
What guarantees do I have at Blitzhandel24?
Blitzhandel24 is an EHI, TrustedShops and CHIP certified online brand shop. Blitzhandel24 also offers its customers permanent support, as well as support for the purchased product. If a product has not been used / redeemed, our customers can benefit from the money-back guarantee.
Related links to "PCmover Image & Drive Assistant"
Available downloads:
Our concept
Pricing policy more
close menu